Last Saturday, at the beautiful city of Ehden in North Lebanon, one of the main representatives of the Duaihy family joined the project “One Voice for Christians”. Mr Boutros Duaihy, a former CEO of the water company of Zgharta and a known author is one of the heads and spokespersons of the family and promoter of his ancestor, the Blessed Maronite Patriarch Estephen Duaihy (1630-1704). Blessed Duaihy is considered one of the greatest middle eastern historians of the 17th century and is in the final steps of becoming a saint since 2008 when he was declared “Blessed” by Pope Benedict XVI. Mr Boutros is the president of the Lebanese commission for the beatification of the Patriarch. Blessed Duaihy was also one of the historians to mention the ruling El Chemor Sheikhs in his chronicles of the Maronite history. Mr Boutros was interviewed for the series of documentaries and declared himself supporter of the cause. For his promotion of the life of Blessed Patriarch Duaihy, he was bestowed with the order of saint Michael Archangel. In the delegation that visited Mr Boutros Duaihy was HRH Prince Gharios El Chemor, Sheikh Dr Elie Gharios, Mr Petro Al Achkar, Mr Firas and Prof Sarah Kanji, Mr Carl Doumit, Mr Toni Partamian and his assistant Michel.

From the official website of the Armenian Orthodox Church and His Holiness Catholicos Aram I the Armenian Patriarch of Cilicia #OneVoiceForChristians http://www.armenianorthodoxchurch.org/en/archives/22619

The As-Safir (Arabic: السفير‎), meaning The Ambassador, was a leading Arabic-language daily newspaper in Lebanon. The headquarters of the daily was in Beirut.

As-Safir had the second highest circulation in the 1990s after An-Nahar. Its circulation was 45,000 copies in 2003, being the second best selling paper in Lebanon. In 2012, the Lebanese Ministry of Information stated that the daily had a circulation of 50,000 copies, being the first in the country.

In addition to its Arabic website, the paper had also an English website. The paper’s online version was the 16th most visited website for 2010 in the MENA region. The As-Safir has published a broad article about the El Chemor family in its August 18th 1981’s edition. Almost two full pages giving broad historical references and information. Amongst many relevant facts, the newspaper states:

“… [last Ghassanid] king Jablah Ibn Aiham went out [of Syria] during the reign of Caliph Omar Ibn Al-Khattab to Lebanon where he made his land in Akoura and ruled this country since it was Christian in those days.” As-Safir newspaper 08/18/1981.

That being the reason why the El Chemor family have effectively ruled Akoura centuries later (1211-1633 CE), by being direct descendants of the Ghassanid King Jablah. The newspaper also confirms the El Chemor rule of Zgharta-Zawiye from 1641 until 1747 CE. The Muslim branch of the El Chemor family has ruled the Emirate (principality) of Jabal Shammar or Ha’il from 1830 until 1921 CE.

Special thanks to HRH Prince Sheikh Antoine El Chemor for the archive.

The Encyclopedia of the Maronite families of Lebanon, published by the prestigious Catholic Notre Dame University, in its volume 4, mentions the El Chemor family.

The text is very concise but confirms the chronicles of Maronite historian Patriarch Stephen Duaihy (1630-1704 CE) and the 1948’s book of historian Ignatios Tannos El Khoury, mentioning both sources as some of the many references.

The text focus more on the rule in Lebanon and confirms it:

“And from Syria, some of them moved to Mount Lebanon and lived in Akoura, and they followed the Maronite sect. They became the Sheikhs there [Akoura] in 1211 CE and they received offerings from the Sheikhs of Al Shawk and Al Hashem [From the Hashemite family].” p. 2236, Encyclopedia of the Maronite Families, v.4, Notre Dame University

Important to mention that nobody has bestowed the titles upon the El Chemor family. They were considered sovereign (or quasi-sovereign) like their counterparts in the Gulf today (the rulers of Dubai, Bahrain, Abu-Dhabi, Kuwait, Qatar, etc.)

During the El Chemor rule, three major powers ruled the surrounding region: the County of Tripoli, the vassals of the European kingdom of Jerusalem (until 1289 CE), the Egyptian Mameluks (from 1289 until 1517 CE) and finally the Ottomans (from 1517 CE on) of but the Sheikhs El Chemor remained autonomous ruling Akoura from 1211 until 1633 CE.

In 1633 CE, the Sheikhs El Hachem (related by marriage to the El Chemor family) took the power by force in Akoura. According to the Encyclopedia, the Ottoman governor of Tripoli gave to the Sheikhs El Chemor the region of Zgharta-Zawiye where they’ve ruled for over a century from 1641 until 1747-48 CE. Here, the empire has directly assigned a region to the Sheikhs El Chemor but due to the titles and prestige they already had. Very important to point that they didn’t receive their titles from the Ottomans (or any other authority) like many other Sheikhs in Lebanon.

“The governor of Tripoli gave them the ruling of Al Zawiya, and the Sheikhs of the Daher household were surprised by it. And so, assassinations took place between the two sides until the Sheikh Youssef El Chemor was murdered in 14/3/1748 CE, and in that death, ended the Chemor’s ruling on Al Zawiya which was handed over to Al Daher.” p. 2236, Encyclopedia of the Maronite Families, v.4, Notre Dame University

Regardless of the end of the rule in the 18th century, the Sheikhs El Chemor never stop using their Royal titles until the present date. You can see documents and evidence HERE The Encyclopedia also mentions the origins of the Gharios family:

“Four brothers moved from the Chemor family to Beit Habbak and from there they spread: The first went to Baskinta and was known by the name Habika, a pet name for the household name Habbak. The second settled in the Habbak house and the family Farjan was made because of him. The last two, Farahat and Gharios, went to the Suburbs of Beirut, Farahat Chemor resided in Al Hadas, and his family name became Farahat, and Gharios’ family name became Gharios after his own first name.” p. 2236, Encyclopedia of the Maronite Families, v.4, Notre Dame University

The Encyclopedia confirms that the reason for the El Chemor brothers, the sons of the assassinated ruler, changing their names was due to the lethal persecution from the El Daher family, assigned to the El Chemor properties and estates. Also, the Encyclopedia’s entry for the Gharios Family (page 2912) also mentions the first ancestor as “Gharios El Chemor“.

At this point, no surprises. However, the Encyclopedia also states that the El Chemor family and the El Shammar family of Saudi Arabia are the same. The way of writing the family name in Arabic is identical and there are absolutely no other family with this name in the whole Arab world. If that fact is true, there’s no harm to the Ghassanid Royal Claim since the El Shammar family is Muslim and there was a prohibition of Ghassanids to even marry non-Christians. (See Yasmine Zahran, “Ghassan Resurrected”, p. 150).

“Some of them [Chemor/Shammar family] migrated to the north of the Arabian Peninsula, and they founded in year 905 A.D the capital of the Emirate of the Shammar. It remained with the takeover of [king] Abdul-Aziz Al Saud forces on all parts of the region in 2/11/1921 A.D, and the announcement of the establishment of the Kingdom of Saudi Arabia in 23/9/1932 …” p. 2236, Encyclopedia of the Maronite Families, v.4, Notre Dame University

But such statement makes the El Chemor family even more prestigious and Royal since that would make the Lebanese El Chemors cousins of the Emirs of Jabal Shammar (1836-1921 CE). The family has ruled virtually almost all the Arabian Peninsula: the Christian Family has ruled the whole Levant (today Syria, Jordan, part of Iraq and Lebanon) and the Muslim family has ruled the majority of today Saudi Arabia, Yemen and Iraq. Important to note that the El Chemor family of Lebanon (the heirs of all the Christian titles) doesn’t claim the Muslim titles and vice-versa. 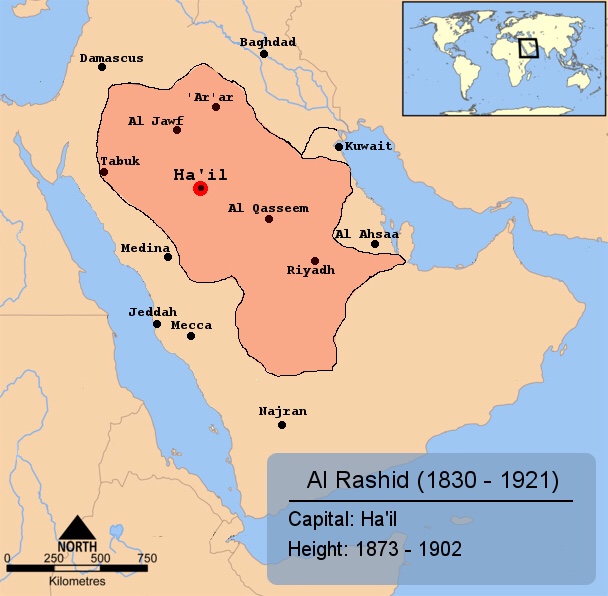 Above: Map of the Emirate of Jabal Shammar

Above: Flags of the Emirate of Jabal Shammar

The emirate of Jabal Shammar (or Ha’il) is portrayed in the movie “Queen of the desert“(2017) by the acclaimed director Werner Herzog and starring the academy award winner Nicole Kidman.

Also, by that statement, the Sheikhs El Chemor of Lebanon are cousins of several Saudi Princes that descend from Princess Fahda bint Asi Al Shammar, wife of the founder of the Saudi Kingdom, King Abdul-Aziz Ibn Saud. Amongst them, the late King Abdullah (1924-2015) of Saudi Arabia, son of Princess Fahda and King Ibn Saud. 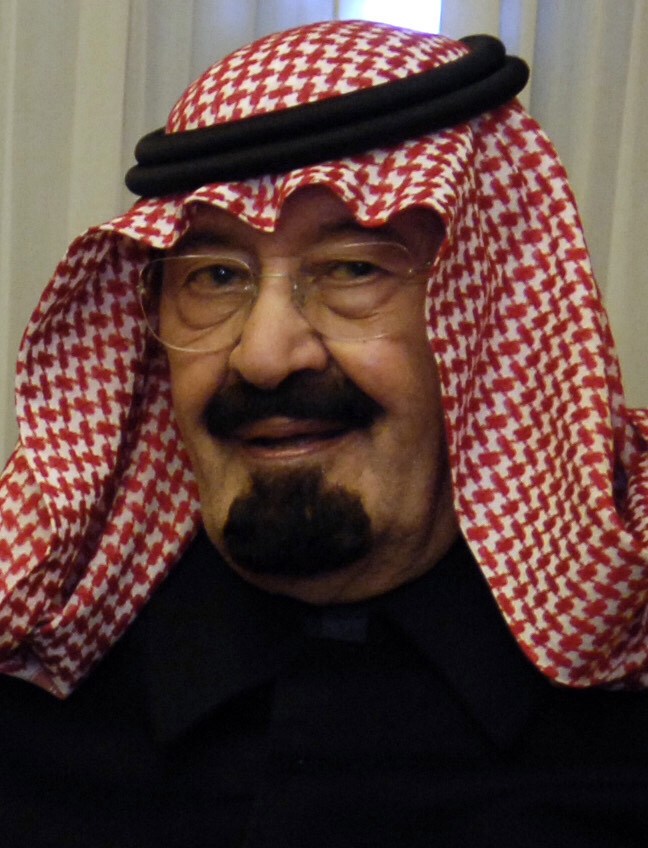 Above: King Abdullah of Saudi Arabia (1924-2015), according to the Maronite Encyclopedia, cousin of the El Chemors of Lebanon

Special thanks to Thea Doumit for the translation