Last Saturday, at Saint Patrick’s Cathedral in New York, a solemn investiture and promotion ceremony was held. The event was promoted by the Equestrian Order fo the Holy Sepulcher of Jerusalem – US East Lieutenancy, with the presence of the Order’s Grand Master and Pope’s Representative, His Eminence Cardinal Edwin O’Brien, the Governor General His Excellency Ambassador Count Leonardo Visconti di Modrone amongst several dignitaries both from clergy and laymen.

The order today is estimated to have some 30,000 knights and dames in 60 Lieutenancies around the world, including monarchs, crown princes and their consorts, and heads of state from countries such as Spain, Belgium, Monaco, Luxembourg and Liechtenstein.

Membership of the order is by invitation only, to practicing Catholic men and women—laity and clergy—of good character, minimum 25 years of age who have distinguished themselves in their professions and for the concern of the Christians of the Holy Land.

The honour of knighthood and any subsequent promotions are conferred by the Holy See— through diploma sealed and signed by the Assessor for General Affairs of the Secretariat of State in Rome as well as the Cardinal Grand Master — which approves each person, in the name of and by the authority of the Pope. The candidate is then knighted or promoted in a solemn ceremony with a cardinal or major prelate.

At the ceremony, HRH Prince Gharios El Chemor was promoted to the rank of Knight Commander by His Eminence Cardinal O’Brien, the Grand Master. 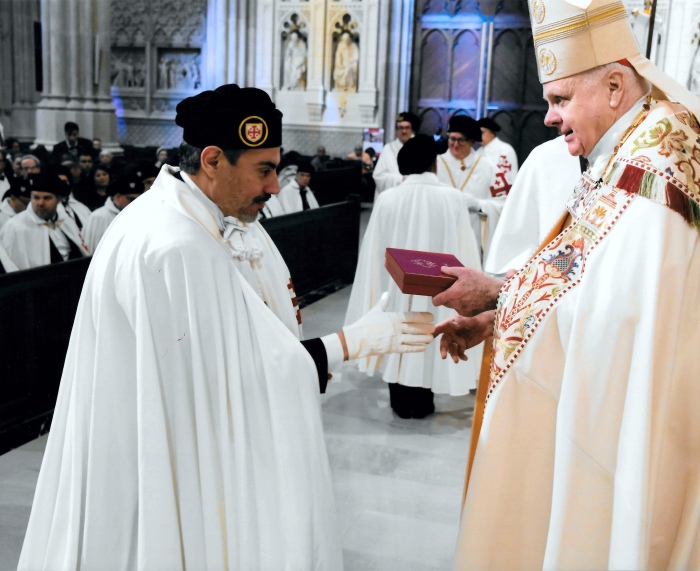 Above: HRH Prince Gharios El Chemor receiving his promotion to “Knight Commander” from the hands of the Pope’s representative, His Eminence Cardinal O’Brien, the Order’s Grand Master

The title of Commander occurred in the medieval military orders, such as the Knights Hospitaller, for a member senior to a Knight. Variations include Knight Commander, notably in English, sometimes used to denote an even higher rank than Commander.

Above: HRH Prince Gharios E Chemor wearing the vestments of a Knight of the Holy Sepulcher of Jerusalem in front of Saint Patrick’s Cathedral last Saturday

The prince was invested in the Vatican’s Order in 2014 at the Our Lady Cathedral in Amman, Jordan by special decree of the His Beatitude Monsignor Fouad Twal, the Latin Patriarch of Jerusalem and Grand Prior of the Order (before his retirement in 2016)