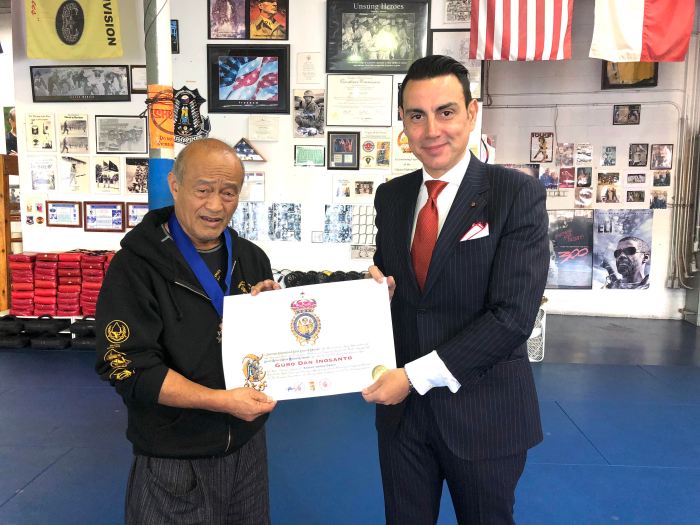 When someone mentions the name “Bruce Lee“, any other explanation is unnecessary. Well, Guro Dan Inosanto was not only Bruce Lee‘s top disciple but also his master of Filipino Martial Arts. After Bruce Lee‘s death in 1973, Guro Inosanto built a great name for himself being a very requested instructor a rare unanimity in the martial arts métier. He also has numerous participations in action films as actor and fight’s choreographer. It’s impossible not to be amazed by this man humility being the legend he is.

Therefore, it was Prince Gharios‘ privilege to honor him with the highest rank (Knight Grand Cross) of the Sacred Order of Saint Michael Archangel. He has declared:

“The greatest purpose of the martial arts is the person’s refinement and self-improvement. To make better men and women. The fighting is important but just a vehicle, a byproduct.  It’s a greater privilege for me to honor Guro Inosanto, than for him to be honored by me. He’s not only a great legend but, above all, a great human being.”

Prince Gharios El Chemor is also a martial artist with almost four decades of experience, holding black belts in Karate, Kobudo (Japanese weapons) and the 5th degree of black belt in Aikido, awarded by the Aikikai Foundation in Tokyo, Japan. During the historical meeting, Prince Gharios humbly requested Guro Inosanto to become his disciple and, for the prince’s priceless fortune, he was accepted.

More about the Order of Saint Michael HERE 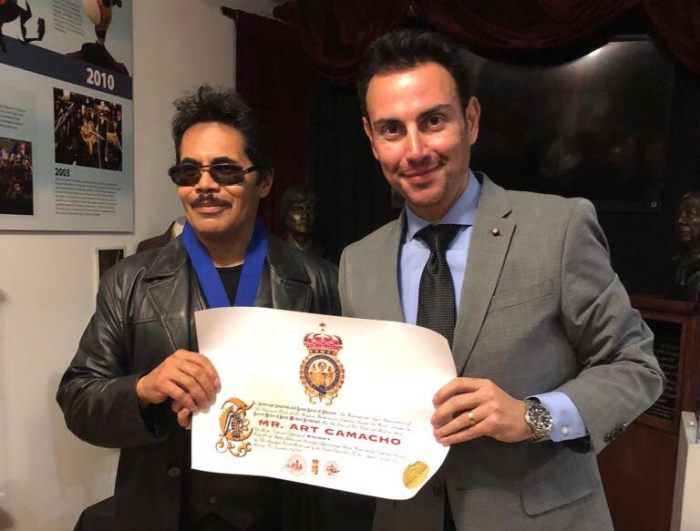 But the reason he was honored goes beyond his successful work in action movies. Mr. Camacho‘s life’s story has inspired many people. It’s about how a poor Hispanic boy is able to go against the odds and through the martial arts being able to succeed and live his dream. His story is portrayed in the book “Art Camacho – A filmmaker’s journey” available at Amazon.com

More about the Order of Saint Michael Archangel HERE

The Asian World Film Festival (AWFF) brings the best of a broad selection of Asian World cinema to Los Angeles in order to draw greater recognition to the region’s wealth of filmmakers, strengthening ties between the Asian and Hollywood film industries.

Uniting through cross-cultural collaboration, the festival champions films from  over 50 countries across Asia spanning from the Middle East to Japan and Russia to India.

More about the festival: http://www.asianworldfilmfest.org/

HIRH Prince Gharios El Chemor of Ghassan Al-Numan VIII is a known master (sensei) in the martial art of Aikido holding the 5th Dan (degree of black belt) certified by the Aikikai Foundation in Tokyo, Japan. He got his first black belt in 1992 being certified by Aikikai in 1993. “Sensei Gharios” as he’s known by his students, ministered a seminar in Campos, Rio de Janeiro, Brazil on August 6th & 7th of 2016. Also taught in the event, his top student Sensei Bernardo Caneca 3rd Dan Aikikai. More info at http://www.AikidoBrazil.com/