Last month, HIRH Prince Gharios El Chemor of Ghassan Al-Numan VIII, head of the Royal House of Ghassan and members of the Ghassanid Royal Family were officially received by the Grand Mufti of Albania,  Dr. Skënder Bruçaj, the highest Sunni Muslim authority in the country.

Dr. Bruçaj, born June 22, 1976 in Malësi e Madhe District, is an Albanian Muslim scholar who has been serving as the Grand Mufti (Albanian: Kryemyftiu) of Albania since March 2014. He is also the current head of the Sunni Muslim Community of Albania and had been Director of the Epoka University and Professor at the Bedër University.

HIRH Prince Gharios El Chemor discussed with His Excellency his initiative called “Alliance for Peace” regarding dialogue between Islam and the West, fighting the causes of the growing Islamophobia, receiving full support from the Sunni leader. For his work promoting peace between the religions the Royal House of Ghassan has bestowed upon His Excellency the highest rank of the Order of Saint Michael Archangel. 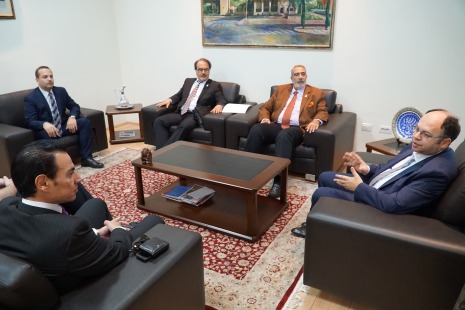 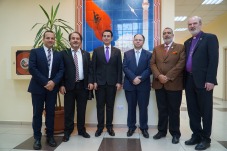 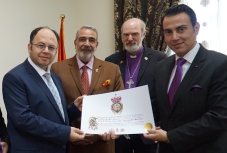 Last month, members of the Ghassanid Royal Family  and also board members of the Royal House of Ghassan have visited the world leader of the Bektashi Order of Sufi Islam at their world headquarters in Tirana, Albania.

His Holiness Grandfather Hajji Baba Mondi  (Albanian: Haxhi Baba Edmond Brahimaj) is the world leader of the Bektashi Order or the Bektashi Tariqah (Albanian: Tarikati Bektashi; Turkish: Bektaşi Tarîkatı), a dervish order (tariqat) named after the 13th century Alevi Wali (saint) Haji Bektash Veli from Khorasan, but founded by Balım Sultan. The order is mainly found throughout Anatolia and the Balkans, and was particularly strong in Albania, Bulgaria, and among Ottoman era Greek Muslims from the regions of Epirus, Crete and Macedonia. The order represents the official ideology of Bektashism (Turkish: Bektaşilik).

A large number of academics consider Bektashism to have fused a number of Shia and Sufi concepts, although the order contains rituals and doctrines that are distinct. Throughout its history Bektashis have always had wide appeal and influence among both the Ottoman intellectual elite as well as the peasantry.

The Bektashi have around 150 million followers worldwide and are well-known for promoting inter-religious dialog.

HIRH Prince Gharios El Chemor discussed with His Holiness his ideas about dialogue between Islam and the west, receiving full support from the Sufi leader. For his work promoting peace between the religions the Royal House of Ghassan has bestowed upon His Holiness the highest rank of the Order of Saint Michael Archangel. 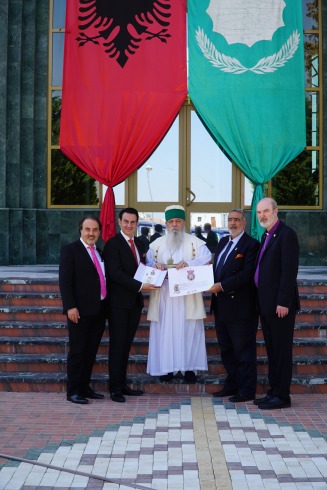 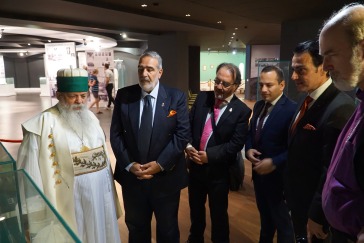 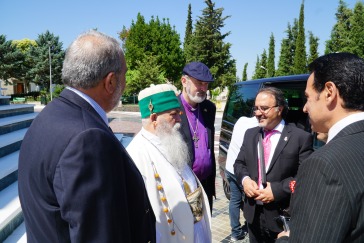 HIRH Prince Gharios El Chemor of Ghassan Al-Numan VIII was honored by the Great State of Arkansas with the honorary title of “Arkansas Traveler” which is the name given to the official Goodwill Ambassadorship of the State.  The beautiful certificate was signed by the Governor Asa Hutchinson and the Secretary of State Mark Martin. The title is the highest honor given to a person not currently living in Arkansas.

The Arkansas Traveler story is connected to Colonel Sanford C. “Sandy” Faulkner, who was very active in Arkansas politics. He was also involved in banking and farming during the 19th century. As oral history has relayed it, Faulkner had gotten lost in the Ozarks during one of his many political campaigns. Looking for a place to stay overnight, Faulkner wandered by a small, log cabin where he was given lodging and hospitality. Faulkner, who was known for retelling of the event, explained that the settler was at first bad tempered and uncommunicative but became more welcoming when Faulkner proved able to complete playing the tune that the settler had been playing on the fiddle. Faulkner’s story of the “Arkansas Traveler” rapidly became part of the state’s folklore.

The award was approved in a resolution by the Arkansas Legislature. The award was created in early 1941 with the first certificate granted May 20, 1941, to President of the United States, Franklin Delano Roosevelt. 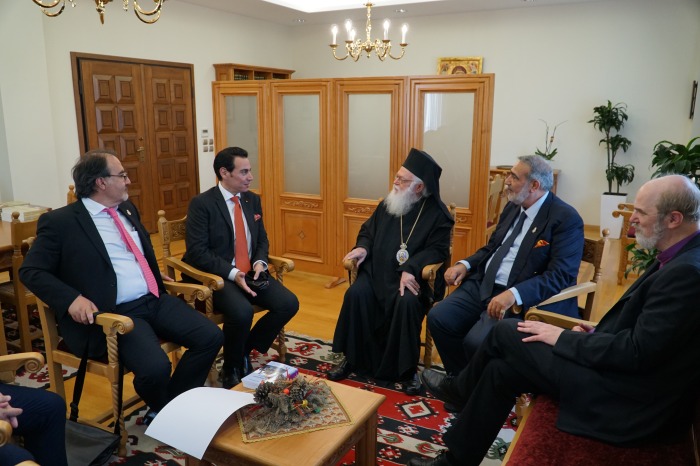 The Royal House of Ghassan has bestowed upon the Patriarch the highest rank of the Order of Saint Michael Archangel and also the Life Membership in the Royal Ghassanid Academy of Arts and Sciences.

His Beatitude personally took the Royal delegation for a tour to the magnificent headquarters’ facilities of the Autocephalous Greek Orthodox Church of Albania. 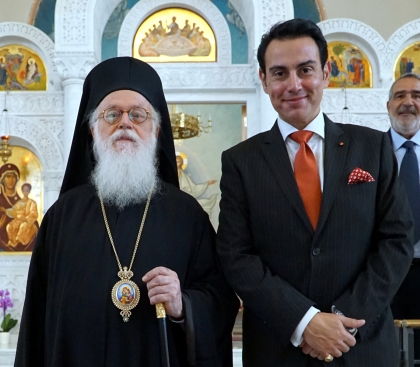 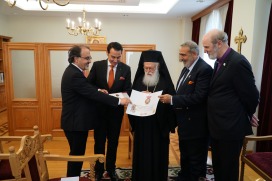 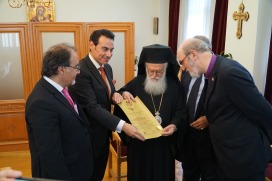 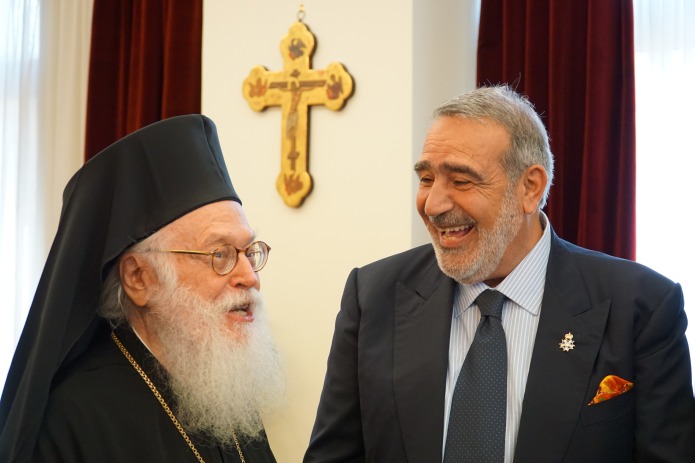 Last April, the Prince Gharios Foundation in Germany (Prinz Gharios Stiftung) helped its first project on German soil: the construction of a church for Christian refugees in the refugee camp near Warburg.

“In charge of the project is His Grace Coptic Archbishop Anba Damian, who has been running the Coptic Orthodox monastery in Brenkhausen for the past 24 years”, said Dr. H.C. Michael Hesemann, the president of the Foundation. His Grace takes care of the refugee camp in which Copts and Syrian Christians live. So far, there has been no way to celebrate the liturgy in the orthodox rite. Now a building is to be renovated and redesigned for this purpose. The concept was welcomed by the board of the Foundation, because of the importance of  allowing Christian refugees to exercise their faith and tradition.

The Prince Gharios foundation, founded in June 2015, is under the Royal House of Ghassan and is dedicated to the Christians of the Middle East – in their old and new home. ” In the orient stood the cradle of our faith. That is why we are associated with them in particular “, explains Dr. Hesemann, a historian and author, “ their tradition is so valuable because it has received the heritage of the first Christians. We must not allow it to fall victim to war and terror.”

The Foundation’s patron, HIRH Prince Gharios El Chemor of Ghassan Al-Numan VIII descends from the El Chemor Sheikhs,  a Christian princely family from Lebanon direct descendants and heirs of the Ghassanid Kings. His ancestors fled to Brazil over a hundred years ago before the genocide of the Ottomans. He’s the head of the Royal House of Ghassan   accredited by the United Nations with the Special Consultative Status.

For The German project, the foundation collected donations at a charity dinner in Zons near Düsseldorf last October and in a Christmas Charity Concert in Campo Santo Tutonico Church in the Vatican last December.

The date when the donation was given was very symbolic and auspicious, the feast of st. Markus, whom the Copts worship as the founder of their church.